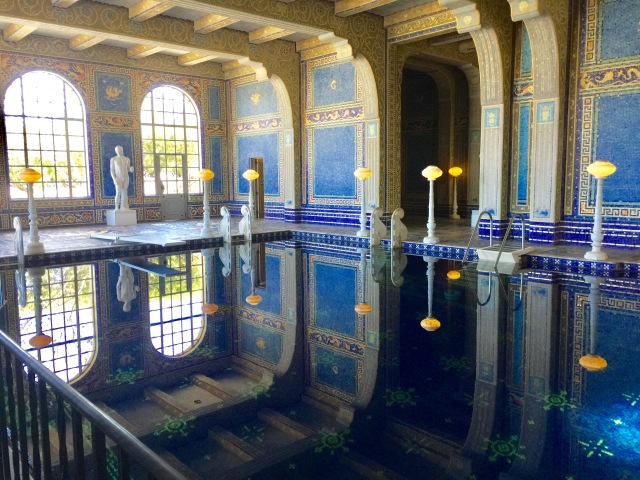 Hearst castle is opulence at its finest. The indoor pool looks as beautiful as King Xerxe’s extravagant banquet was described in this passage. Although the banquet was fit for a queen, Xerxes’ party entertained only the men in his kingdom. His furious anger resulted in the fact that he was now without a queen, aroused at his own inability to impress those attending. – Teresa #angerleadstoisolation

5 When it was all over, the king gave a banquet for all the people, from the greatest to the least, who were in the fortress of Susa. It lasted for seven days and was held in the courtyard of the palace garden. 6 The courtyard was beautifully decorated with white cotton curtains and blue hangings, which were fastened with white linen cords and purple ribbons to silver rings embedded in marble pillars. Gold and silver couches stood on a mosaic pavement of porphyry, marble, mother-of-pearl, and other costly stones.

7 Drinks were served in gold goblets of many designs, and there was an abundance of royal wine, reflecting the king’s generosity. 8 By edict of the king, no limits were placed on the drinking, for the king had instructed all his palace officials to serve each man as much as he wanted.
9 At the same time, Queen Vashti gave a banquet for the women in the royal palace of King Xerxes.

10 On the seventh day of the feast, when King Xerxes was in high spirits because of the wine, he told the seven eunuchs who attended him—Mehuman, Biztha, Harbona, Bigtha, Abagtha, Zethar, and Carcas— 11 to bring Queen Vashti to him with the royal crown on her head. He wanted the nobles and all the other men to gaze on her beauty, for she was a very beautiful woman. 12 But when they conveyed the king’s order to Queen Vashti, she refused to come. This made the king furious, and he burned with anger.