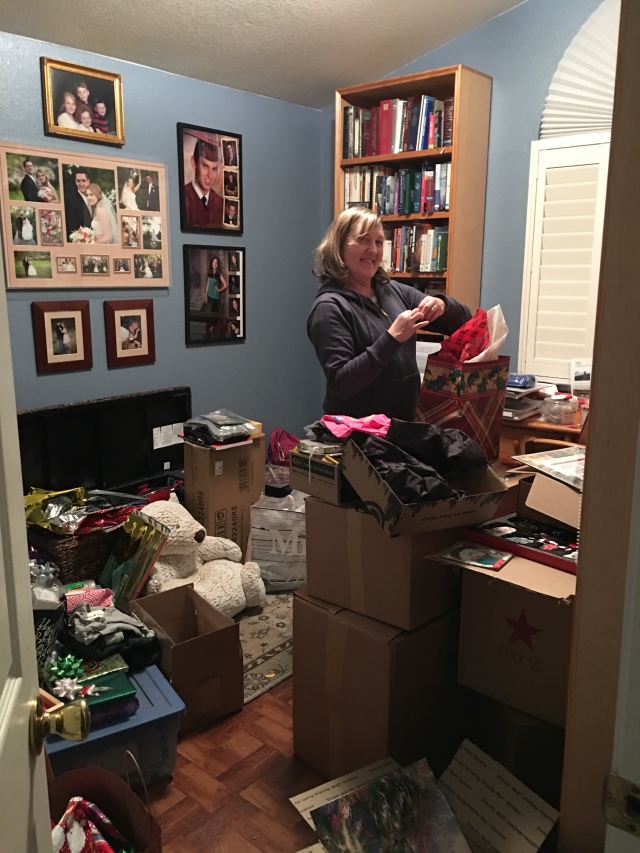 My office is not exactly organized at this time of year. Preparing Christmas presents for my family, I’m joyful yet reflective of the reason for the season. The birth of our Savior reminds us of how much He gave (His life) in order to provide salvation for us. In V. 11 of this passage we are reminded of our protection from the dragon (aka- the accuser of the brethren), “11 And they (the believers) have conquered him (the dragon) by the blood of the Lamb (Jesus Christ) and by the word of their testimony, for they loved not their lives even unto death.” – Teresa #holdon #JesusChristtheLORD #RachelScott

7 Now war arose in heaven, Michael and his angels fighting against the dragon. And the dragon and his angels fought back, 8 but he was defeated, and there was no longer any place for them in heaven. 9 And the great dragon was thrown down, that ancient serpent, who is called the devil and Satan, the deceiver of the whole world—he was thrown down to the earth, and his angels were thrown down with him. 10 And I heard a loud voice in heaven, saying, “Now the salvation and the power and the kingdom of our God and the authority of his Christ have come, for the accuser of our brothers[b] has been thrown down, who accuses them day and night before our God. 11 And they have conquered him by the blood of the Lamb and by the word of their testimony, for they loved not their lives even unto death. 12 Therefore, rejoice, O heavens and you who dwell in them! But woe to you, O earth and sea, for the devil has come down to you in great wrath, because he knows that his time is short!”

13 And when the dragon saw that he had been thrown down to the earth, he pursued the woman who had given birth to the male child. 14 But the woman was given the two wings of the great eagle so that she might fly from the serpent into the wilderness, to the place where she is to be nourished for a time, and times, and half a time. 15 The serpent poured water like a river out of his mouth after the woman, to sweep her away with a flood. 16 But the earth came to the help of the woman, and the earth opened its mouth and swallowed the river that the dragon had poured from his mouth. 17 Then the dragon became furious with the woman and went off to make war on the rest of her offspring, on those who keep the commandments of God and hold to the testimony of Jesus. And he stood[c] on the sand of the sea.

One thought on “Grandma’s workshop”